A unique Turku Music Hall Fuuga will be built on the Independence Square at the heart of the City Turku, by the river Aura. The Music Hall will feature world-class acoustics and innovative design. The construction will be finished by the end of 2025.

The building will have two halls, a 1,300-seat main hall serving as a concert hall, and a 300-seat multifunctional hall.

Orchestral music will be the primary function of the main concert hall. In addition, the concert hall can accommodate other events and functions, such as electrically amplified music performances, congresses and meetings as well as smaller functions. The orchestra pit enables the performance of operas, among others.

The shape of the hall is an applied shoe box design. It forms the heart of the house, and the daylight that streams into the hall gives the house a clear character also in the evening. Indoor shapes are curved and dynamic. Wooden surfaces create warmth in the space.

The stage accommodates 100 performers; a section of the stage can be lowered to serve as the orchestra pit.

The current concert hall in Turku has reached its technical life span and the assessment of options for renovation, expansion and new construction was carried out in 2018. On 27 May 2019, the Turku City Council decided in favor of the new construction.

The winner of the invitation to tender for the concert hall was Harmonia, the group with the best scores in the competitive tendering process. The group consist of Hartela Länsi-Suomi Oy, PES-Arkkitehdit Oy, and WSP Finland Oy as well as Laidun-design Oy as a subcontractor. 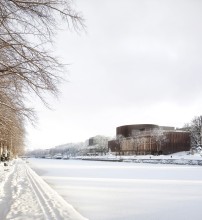 3D illustrations of the new Turku Music Hall, by PES-Architects

The name competition for the Turku Music Hall has come to a conclusion. The competition was open from 15 November to 15 December in the Kerrokantasi service, receiving a total of 1730 votes. Turun musiikkitalo Fuuga, or Turku Music Hall Fuuga, received 635 votes, making up 37 per cent of the votes.

The alliance agreement for the Turku Music Centre and the purchase order for the project planning phase were signed on Monday 10 January 2022 by the City of Turku and the Harmonia consortium, consisting of Hartela Länsi-Suomi Oy, PES-Architects Ltd and WSP Finland Oy. The Music Centre will be built using the alliance model.